Peter Howson has established a formidable reputation as one of his generation’s leading figurative painters. Many of his paintings derive inspiration from the streets of Glasgow, where he was brought up. He is renowned for his penetrating insight into the human condition, and his heroic portrayals of the mighty and meek. His art is described by Robert Heller as “founded in Humanity, especially the human face”

Howson was born in London in 1958. He studied at Glasgow School of Art from 1975 – 1977, and returned in 1979 to complete a Masters degree . In 1985 he was made the Artist in Residence at the University of St Andrews and also a part-time tutor at Glasgow School of Art. In 1992 he was commissioned by the Imperial War Museum to record the conflict in the former Yugoslavia . He was appointed official British war artist for Bosnia in 1993 and a few years later in 1996 was awarded Doctor of Letters Honoras Causa, University of Strathclyde.

Peter Howson has exhibited with Flowers since the 1980s. His work has been shown in major shows around the world including the ‘Eye on Europe’ exhibition at the Museum of Modern Art, New York, and ‘The Naked Portrait’ exhibition in the Scottish National Portrait Gallery in 2007.

Prior to converting to Christianity in 2000 , Howson responded to pain by pursuing hedonism. His experiences of abuse – whether self-inflicted and substance-related or the traumatic events of his childhood – have afforded him an affinity with those individuals who are classed as somehow ‘on the edge’. His work has caught the attention of a number of prominent cultural figures, celebrities and creatives as well as striking a chord with prisoners, a voiceless demographic from whom Howson receives many letters of support. His ability to speak to the peripheries – to both the exclusive echelons living ‘the highlife’ and the socially alienated outsiders labelled ‘low lives’ – is proof of his enduring skill at capturing the maverick, excessive and non-conformist, while also seeking spiritual change.

Howson feels very strongly about the way Burns tends to be sentimentalised and some years ago he created a series of drawings, via which he hoped to help to dispel the myths around Burns and to reveal his vision of the ‘real’ Burns. In these drawing Burns is portrayed as a desolate, confused figure. This is in stark contrast to the figure painted by Alexander Nasmyth in 1787. In this painting he looks, albeit with a romantic slant, more like a well set up farmer – in keeping with the popularly held myth of him as an uneducated, ploughman poet. Howson, however, felt sure that, had Burns lived, he would have eventually found the pressure to conform too constraining and ultimately destabilising. 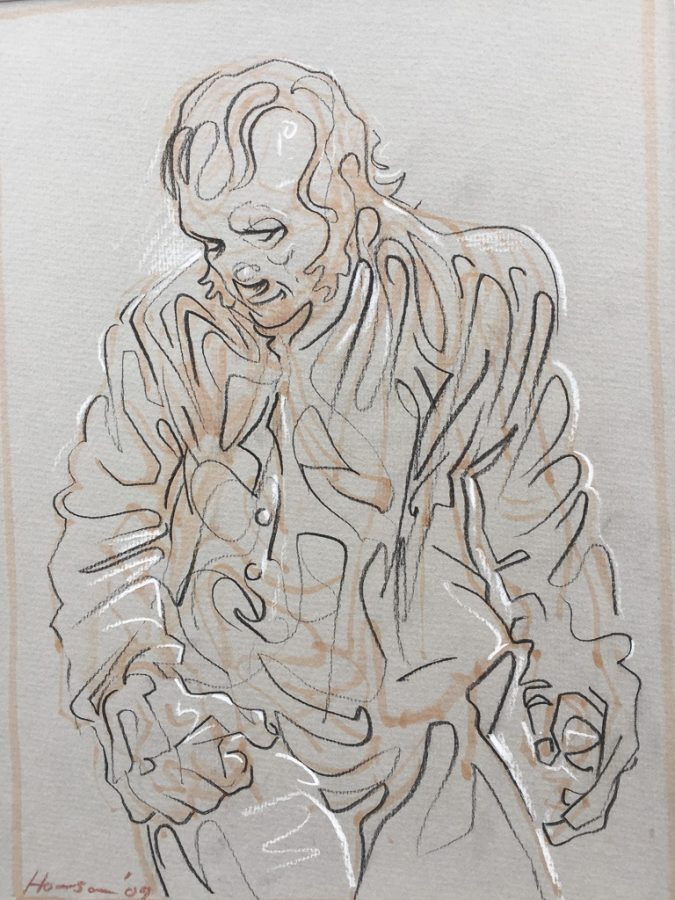 “I have never felt happy about the way Burns’s image is used in a way which I think degrades him. I have always considered him to be the greatest poet and songwriter that ever lived” Peter Howson